Much more needs to be said, I believe, about point number VI. If only, for example, because of the use of the term “synderesis” in Aquinas, taken from Jerome’s thoughts on Ezekiel’s account of the chariot:  George Anastaplo on “The Thomas Aquinas of Leo Strauss”. 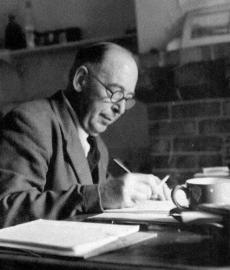 I want to collect a few thoughts on C.S. Lewis, grammatology, and world politics.  Lewis is much more closely related to these themes than we realize.  I’ve written about Lewis in this space before, about his enigmatic thoughts on miracles.  I’ve just recently written about the possibility of the paradigmatic treatment of miracles being a critique of miracles.  But I want to think a few thoughts out loud about Lewis’s small and excellent book The Abolition of Man.

First, a small vignette from my childhood.  Growing up, I remember two distinct stacks of reading material on my Father’s bedside table: the first comprised of Mad Magazine; the second of Lewis’s oeuvre.  The result was that for many childhood years I mistook the tattered and torn copy of Mere Christianity to be the source of my father’s laughter.  I always assumed it to be a work of comedy.  Years later my father would urge me to read Lewis’s lecture on Historicism.  By either chance or fate my future wife was already urging me to read The Chronicles of Narnia.  Foolishly spurning the good advice of both, and always looking for an excuse to buy a new book, I settled on the thin and double-spaced edition of Abolition.  This was at least eight years ago.  I suspect I’ve returned to this book at least once a year since.  However, it wasn’t until the last two years or so that its connection (and what I believe to be Lewis’s implicit political philosophy) to the wider world of twentieth century political philosophy began making itself clear.

In his 2002 book Our Posthuman Future, Fukuyama begins with a discussion of the two great dystopian pictures from the twentieth century: Orwell’s 1984 and Huxley’s Brave New World.  The thrust of Fukuyama’s introduction is that Huxley’s dystopia is more subtle and therefore more challenging than Orwell’s: “the evil is not so obvious because no one is hurt; indeed, this is a world in which everyone gets what they want.”  Fukuyama notices a kinship between Huxley and Lewis, as Huxley presents us with a picture of the confluence of technology and biology bringing about the “abolition of man”, bringing about an evolution in the definition and conception of “human nature”.  That is, Fukuyama admits that history will not end [has not ended] if human nature changes, and Huxley imagines just such a scenario (leaving aside criticisms of his end of history thesis itself).   Fukuyama gives us hints of where his argument is going in The End of History.  In the seventeenth chapter – The Rise and Fall of Thymos – devoted to human nature and the struggle for recognition [cf. this post], Fukuyama deploys Lewis’s language and imagery:

The attempt of liberal politics in the Hobbes-Locke tradition to banish the desire for recognition from politics or to leave it constrained and impotent left many thinkers feeling quite uneasy.  Modern society would henceforth be composed of what C.S. Lewis called “men without chests”:  that is, people who were composed entirely of desire and reason, but lacking that proud self-assertiveness that was somehow at the core of man’s humanity in earlier ages.  For the chest was what made man man:  “by his intellect he is mere spirit and by his appetite mere animal.” (EOH 188; AOM 25)

Fukuyama goes on to draw a parallel with Nietzsche’s revival of thumos.  I will leave this argument aside and note in passing that it is Nietzsche – and the turn to value creation and self-assertion out of sentiment – that Lewis takes as his interlocutor in Abolition.

Lewis is a grammatologist.  His reflections on thumos, on heart, on that nucleus that makes us human, begin with reflections on a grammar book.  He begins from a reflection on how we speak about the world around us.  (nota bene, Lewis begins with speaking and ends with seeing.  There is a Socratism in his method).  In the opening lines of The Weight of Glory, Lewis calls the difference between the words ‘love’ and ‘unselfishness’ “of more than philological importance”.  From the very beginning of Abolition:

The feelings which make a man call an object sublime are not sublime feelings but feelings of veneration. If This is sublime is to be reduced at all to a statement about the speaker’s feelings, the proper translation would be I have humble feelings. If the view held by Gaius and Titius were consistently applied it would lead to obvious absurdities. It would force them to maintain that You are contemptible means I have contemptible feelings’, in fact that Your feelings are contemptible means My feelings are contemptible. But we need not delay over this which is the very pons asinorum of our subject. It would be unjust to Gaius and Titius themselves to emphasize what was doubtless a mere inadvertence.  The schoolboy who reads this passage in The Green Book will believe two propositions: firstly, that all sentences containing a predicate of value are statements about the emotional state of the speaker, and secondly, that all such statements are unimportant. It is true that Gaius and Titius have said neither of these things in so many words. They have treated only one particular predicate of value (sublime) as a word descriptive of the speaker’s emotions. The pupils are left to do for themselves the work of extending the same treatment to all predicates of value: and no slightest obstacle to such extension is placed in their way. The authors may or may not desire the extension: they may never have given the question five minutes’ serious thought in their lives. I am not concerned with what they desired but with the effect their book will certainly have on the schoolboy’s mind.

This book is an ascent.  An ascent from what is most common in our speech to what is most permanent: judgments of value, or intellection of the Tao.  Do not be fooled by Lewis’s shorthand descriptor:  The Abolition of Man is a book about Natural Right.  “The rebellion of new ideologies against the Tao is a rebellion of the branches against the tree: if the rebels could succeed they would find that they had destroyed themselves. The human mind has no more power of inventing a new value than of imagining a new primary colour, or, indeed, of creating a new sun and a new sky for it to move in” (p.44).  See also the prefatory notes to his appendix, especially point number 2, which reads like a prediction of Fukuyama’s repetition of Kojeve:

“The idea of collecting independent testimonies [of Natural Right] presupposes that ‘civilizations’ have arisen in the world independently of one another; or even that humanity has had several independent emergences on this planet. The biology and anthropology involved in such an assumption are extremely doubtful. It is by no means certain that there has ever (in the sense required) been more than one civilization in all history. It is at least arguable that every civilization we find has been derived from another civilization and, in the last resort, from a single centre—’carried’ like an infectious disease or like the Apostolical succession.”

Is this a Darwinian conservatism or a doctrine of original sin? Lewis has something like a world state in mind: “Man’s conquest of Nature, if the dreams of some scientific planners are realized, means the rule of a few hundreds of men over billions upon billions of men. There neither is nor can be any simple increase of power on Man’s side. Each new power won by man is a power over man as well.  Each advance leaves him weaker as well as stronger.”  All these things said and quoted, I will leave the last words to Lewis, and I take this point of his to be his most innovative and useful for thinking through the ideas of human nature and natural right:

“At the moment, then, of Man’s victory over Nature, we find the whole human race subjected to some individual men, and those individuals subjected to that in themselves which is purely `natural’—to their irrational impulses. Nature, untrammelled by values, rules the Conditioners and, through them, all humanity. Man’s conquest of Nature turns out, in the moment of its consummation, to be Nature’s conquest of Man.”